Let’s see… back to the road trip…

Picked up the van at about noon and rolled out of town shortly after. So excited to be back at it after being stuck for a little over 24 hours! But Katie was going to have to make an expensive flight change and we were going to have to find one more hotel.

We hop back on the highway and are flying along when we hit packed snow and ice. For 100 miles. Cars in ditches everywhere, tracks in ditches everywhere yet everyone is passing us. I’m still not sure how we made it up some of those hills. We trudged along between 25 – 45 mph. Hit the county line and like magic, the roads were clear. (thanks Treasure County!!) The rest of the ride was pretty uneventful. Hit Butte (“Butt”, Katie called it) around 10 something pm and asked the dude in sunglasses at the gas station how the roads were to Missoula. He had heard they were pretty bad. Because I heed no warnings, we continued on, making it to Missoula around midnight. (the roads weren’t bad at all)

Crashed for 5 hours or so and drove off around 7. Once again a pretty uneventful drive though Idaho was gorgeous! It was snowing and covered in snow and completely beautiful. Once we got near a city, Katie started searching for donuts. We took a much needed pit stop in Coeur d’Alene and munched em down.

Perhaps the best part of this leg of the trip was our stop in Ellensburg to unload my mattress. I have a massive full size mattress that Ben somehow squeezed into the van. To any passerby (and there were so many!), I imagine it looked like Katie and I were trying to pull an adult from a lady’s baby hole. That’s what it seemed like to me anyway. Haha. It had to have taken a good 20 minutes of pushing and pulling, but finally the mattress was out and we were once again en route to Seattle.

This was Superbowl Sunday and I was so excited to find a local bar and watch the game with the cheering crowd. However, Murphy had been a pretty good sport the entire drive and we thought it was best to get him some exercise before settling in anywhere. We found a nice dog park where he ran around a bit and we got an awesome view of Mt. Rainier. I really wanted it to be clear so my dear sis could see the mountains and why I need to be here, and it was!

We attempted to go together to a bar near the hotel to watch the game but Murphy had other plans for us. He started whining after we left the room so Katie chose to stay back and I went to a bar for halftime and most of the 2nd half. It was definitely a happy crowd and fun to experience. After the game we went to grab some food and that’s when the real celebration began – people cheering and yelling in the streets and shooting fireworks. I understand it’s exciting but really, it’s just football. I was happy for the revelers anyway.

Katie left around 4am for the airport and so it was just me and Murphy and our new adventure. 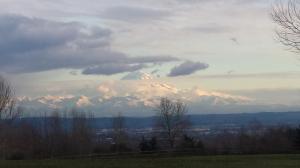 Experienced my first rainy day since I got here. It wasn’t that bad! I’m sure a bunch of them in a row could be draining but for now I’ll enjoy every new day I have here. 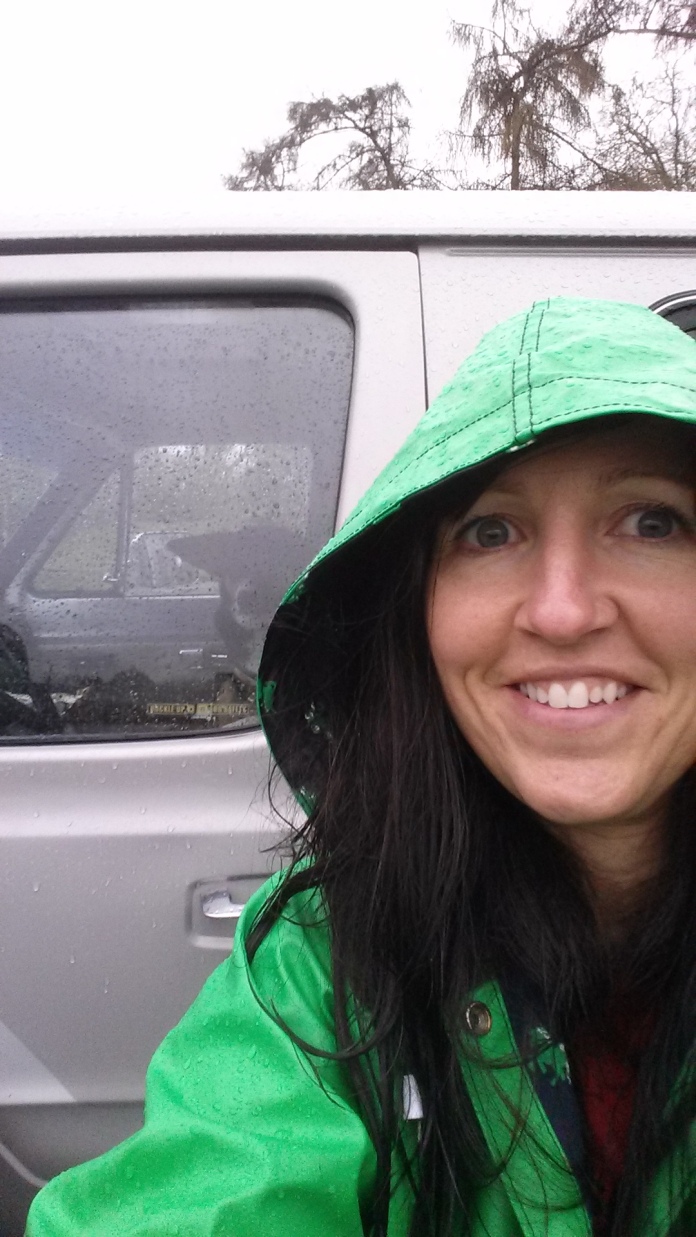 After a walk around Green Lake

The day before I was to hit the road for Washington the weather monsters predicted snow for my departure. I figured I’d just wait and see. Decided when I woke at 5:30 that I’d wait awhile. Good thing because I hadn’t yet fully loaded the van and I decided to completely rearrange what was already in there. We smooshed my gigantic mattress back in and I proceeded to stuff every last inch of the van with my things. My sister thought Dickinson, ND was a reasonable distance for our shortened day and at 1pm we finally rolled westward.

The drive to Dickinson was mostly uneventful. The van was a champ and held 70mph just fine. North Dakota gave us a gorgeous gift in the form of a beautiful sun dog framed sunset. We made it safely to Dickinson and stayed in a nearly brand new HomStay. It was pretty nice and this morning’s breakfast included Lucky Charms which makes it the best place I’ve ever stayed.

Westward again at 8:30. The day was brisk and bright and seemed perfect for continuing our journey.

The van started stuttering. Then it’d recover and stutter again. And then it completely died. All the “I told you so”s were echoing in my head. We called AAA and the most familiar voice took my call. It took a few minutes to place it but I realized that Steven sounded just like Phil Robertson. Even called me Miss Amy! But he couldn’t find me a truck and had to assign the call to some specialist that would call me back in 20 minutes. When she did, it was only to tell me she was working on it. When she called again she found a guy who’d arrive in 15. I was really needing a restroom and wasn’t sure I’d make it. So I propped my self up against the van ditch side, sprayed the shoulder and maybe my boots a little. As much as I’ve used nature for a restroom you’d think I’d have this down by now. I don’t. While we were waiting/spraying my trusty travel companion thought maybe we should ask if the tow truck could take us to Glendive, the next large town. The driver was just a young guy and said he was pretty sure he had to take us to the nearest shop.

And what a shop it was. Before the van was off the truck the owner said he wasn’t sure he could do anything for us. He did try though. Calling all over to find this alternator that was only in Iowa according to one resource. Shortly after arriving I had to use the restroom again, having stopped mid-stream on the shoulder to avoid being spied by passers by. I asked him about a restroom and he directed me to the back, mentioning it wasn’t a nice one. Not a nice one? It was the dirtiest room I’ve ever been in. The seat was up and the rim was covered in dirt/scum along with the bowl, sink and floor. Once again squatting, I’m pretty sure I hit more floor than bowl. And tp? None. There were some crumpled up paper towels so I wiped up my legs and then used my foot to dry up the floor. Ish!

The mechanic confirmed he could get us an alternator on Monday. Not really an option considering my sister is flying out of Seattle at 6am Sunday. (Not anymore.) And, the idea of staying at a motel in Beach, ND was not the most pleasant one. (Sounds like it should be nice though, right?) We called some shops in Glendive and I found a Napa that could have the part tomorrow morn. He recommended a shop. I spoke with a nice guy named Robert, who when I met him later referred to me as a lady and called me Miss Amy (that is growing on me!), and he said they could get me in at 10.

It was time for another call to AAA. Same story, different agents. And an hour wait for the tow this time.

This guy was a chatter! From Toronto, lived in Florida, Vegas, now Glendive. Told us all about no one wanting to tow for AAA as they don’t pay much. So good to know! He recommended a hotel his wife manages, where we had already decided to stay, dropped the van off and brought us to the hotel. Even got us a luggage cart!

They mentioned fresh baked cookies would be coming when we checked in so we ordered pizza and went back to the lobby. Once, twice, three times, no cookies. Fourth time was the charm! Of course we had already picked up candy as an excuse to walk through the lobby. But we hadn’t eaten since breakfast so don’t judge!

Now we sit all night long (we got here around 4:30) and hope for a better tomorrow. 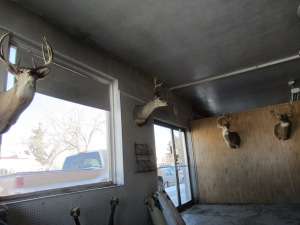 The lobby of the lovely auto shop in Beach.

I had planned to move once before, somewhere nearer my dear friends the Smokies, but lack of job opportunities kept me here. Since then I bought a house, got a great job working with a super group of people, got a dog and all the things that come with settling into mid-adult years. I thought having these would calm my wanderlust but if anything, they only brought it further to the forefront of my mind. I traveled more in 2013 than I ever have before and dreaded coming home every time.

So here I am now, quitting that job, leaving my house with my current tenants, packing my dog, dresses and bed into an old van and heading west.

I’m excited to explore the mountains of Washington, visit Oregon for the first time, return to the Canadian Rockies and Yosemite and live near the sea.

Though I have a tough time sticking to any project for too long, I hope to regularly use this blog to reflect on my journey and share some of my past journeys too.