This week last year I was in Alaska for the first time. I traveled by plane to Fairbanks, by train to Anchorage, then Whittier, by ferry to Cordova, plane again to Anchorage and then of course by plane back to Minnesota. Loving both trains and boats, it was the perfect trip for me.

In Fairbanks I Couchsurfed for the first time and couldn’t have found more gracious hosts. Though I arrived pretty late in the evening the lady of the house stayed up and chatted with me for a good two hours. We quickly became friends and I continue to look forward to her Facebook posts about all they see and do up there. If you’re not familiar with Couchsurfing, it’s pretty much just crashing at a stranger’s place. Of course you read all about them and weed out the creepies first. Being that I love meeting new people, I highly recommend it but realize it’s not for everyone.

Early the next morning I was up to catch the train to Anchorage. It took me far too long to discover that I could hang out in the open air vestibule as much as I wanted, but upon that discovery that’s pretty much what I did the rest of the day! I now understand what a thrill it must be to hop a train. So far removed from roads, seeing landscapes few others will see. 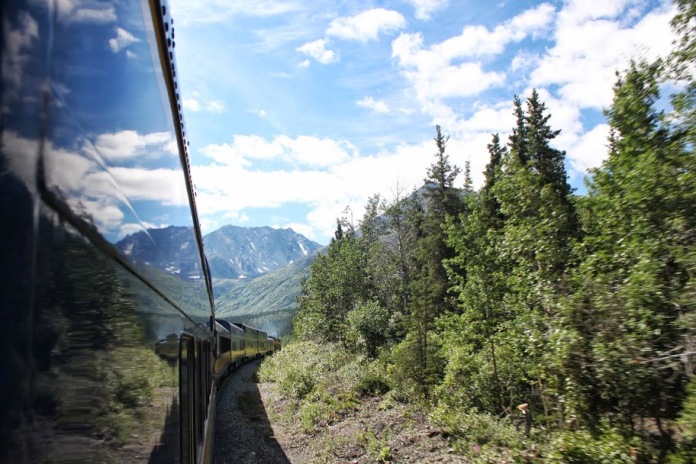 Reflections on the train.

It was the clearest, bluest sky I have ever seen and Denali was out in full the entire day. Absolutely breathtaking. It was tough to find an open vestibule whenever it returned to view but I managed to get a few good shots.

The ride to Anchorage was a little over 12 hours but it never once felt too long. If anything, it wasn’t long enough. Should you ever visit (and you should!! now! and take me with!), make sure to add the Alaska Railroad to your itinerary.

I stayed one night in Anchorage at a hostel, also my first time doing that. I was looking forward to meeting people there but never really got that part of the experience as I wasn’t there very long. The only thing remarkable about my stay was that my phone died. Luckily I had the Kindle Fire I purchased for the trip so that I was able to connect when I needed to.

The next morning I boarded another train for Whittier, where I needed to catch my ferry to Cordova the next day. Another beautiful ride. I had read a little about the town and it sounded interesting enough to stay the night in but as I was chatting with one of the employees on the train he mentioned a catchphrase of those not living in town is “There’s nothing shittier than Whittier.” With that, and his belief that I could possibly catch the ferry leaving in 5 minutes, I ran towards the ferry terminal. Quite the sight I’m sure with a 30lb pack on my back. No real surprise, I didn’t make it. I briefly sulked but soon picked myself up and explored the little town. Not much to explore but large enough that it took a considerable amount of time to find a shoe I lost while wandering. (from my pack, not my foot.)

I found lodging with a bar and spent a large portion of the rest of my day and night there, chatting with local fishermen. So many stories! I don’t think you’ll find a group of guys with better tales to tell. I wrote down many of the details somewhere, but as I was recalling my dead phone it reminded me that the Kindle I brought with me has since died and may have taken my notes with it.

The next day I hopped on the ferry to Cordova, another amazing ride. To be on the water surrounded by mountains is my dream come true. I lived it for 3 hours or so that day.

Cordova is a pretty neat town, only accessible by boat or plane. I spent all 6 nights of my stay there in a boat, did some hiking, danced at Salmon Jam, experienced gillnetting (pulled the salmon from the net with my bare hands!) and was pretty much awestruck every day by the beauty around me. 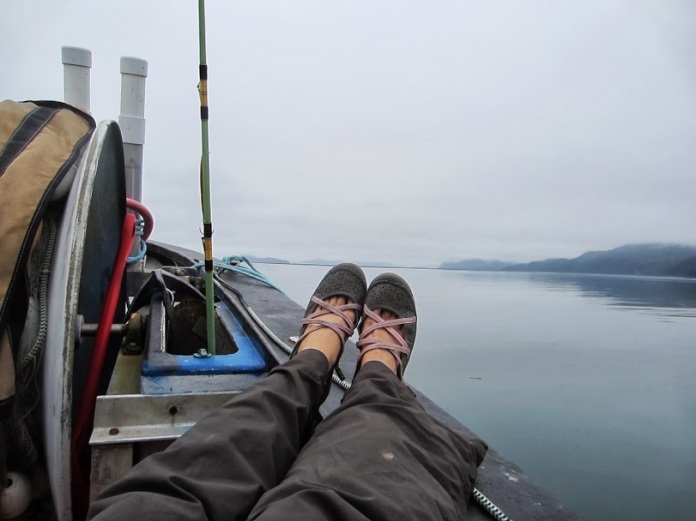 View from my “bed” one morning. 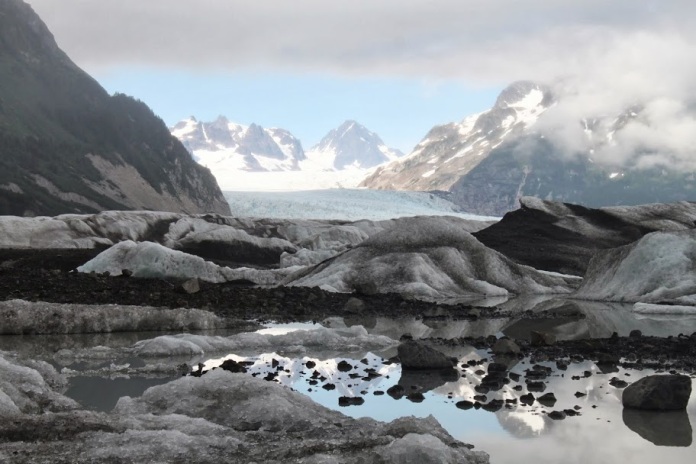 Just a glacier. And one of my favorite pics of the trip.

I was told this boat is kind of a big deal.

I hadn’t really planned my departure from Cordova but enjoyed it so much that I decided I’d fly back to Anchorage so I could spend as much time there as possible. Though I didn’t consider it so at the time being it caused me to miss my office summer party, the plane I was supposed to take out of there couldn’t land and I was gifted with an extra day in Alaska. And over 12 hours in the Anchorage airport. In case you should ever have to sleep there, it’s a little drafty. Be sure to pack a blanket! (recalling that part reminded me I did hand write my notes this trip. whew! now to find them. so happy my brain is still able to connect some of the dots.)

Though I had long wanted to leave Minnesota, it was Alaska that ultimately set the wheels in motion. I knew I couldn’t live away from the mountains any longer. Could I live in Alaska? Maybe some day. I still loved city life too much. The decision to move to Seattle was largely due to its proximity to Alaska (in addition to having mountains, lots of water and a huge city), thinking I could more easily travel there. I thought I’d get back there this year but have been pretty smitten by this wonderful new city I have to explore. Hopefully 2015 will afford me the time to enjoy both of them.

This year marks the 150th anniversary of the signing of the Yosemite Grant Act, protecting Yosemite and the Mariposa Grove. (Thanks Abe!) I’m definitely going to visit as there are a ton of events scheduled and I’ve been longing to get back ever since I last saw it in my rearview mirror. (4 years ago this August. way too long! the photo in my header was taken on that trip.)

Some day I’d like to work there or another of our western national parks. Until then, if anyone would like to join me for some camping and hiking, I’d love to have some company. I’m thinking June or August. Let me know! In the meantime, check out this beautiful site and learn all about Yosemite and other national park topics.

The very best day of my outdoor life came the fall of 2009. I had been laid off of work for a few months and decided to head down to the smokies, one of my favorite road trips. I wrote pretty extensively of this trip in Facebook’s notes, so I’ll reshare what I wrote then.

–Sunny day! I decided to stay another night so I can enjoy the park in the sun.